Join 6,000+ subscribers and get our latest articles via email.

What’s the Point of Dressage? 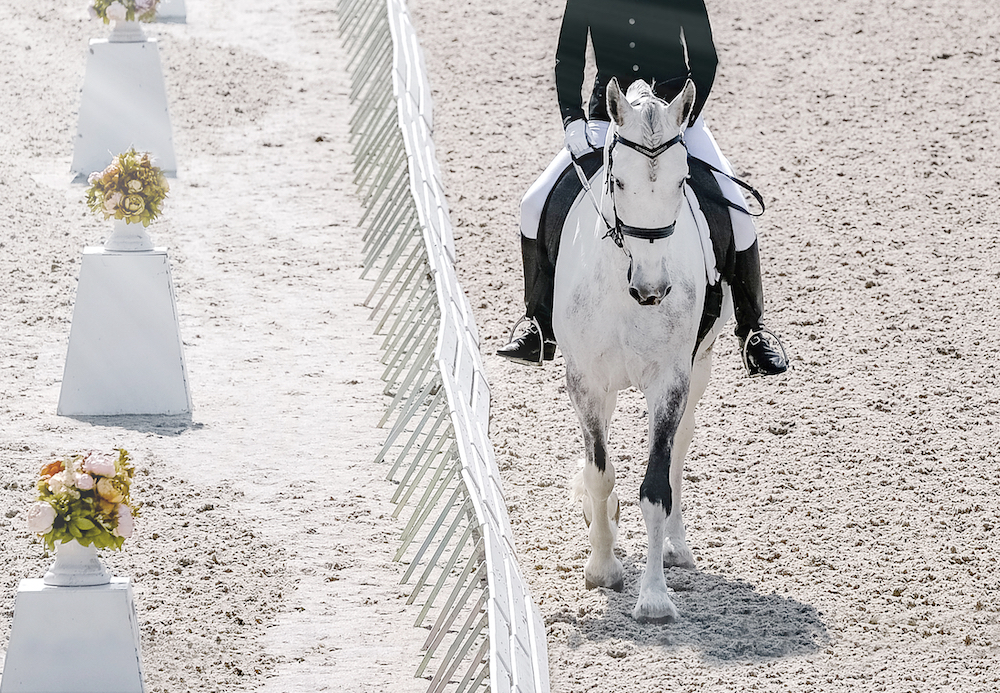 Dressage is a confusing sport to many people. Thousands of hours are spent in training for a mere 5-10 minutes of riding around in between some whiteboards.

But contrary to popular belief, dressage is not merely about teaching your horse to perform “tricks,” nor is its sole purpose to compete and win rosettes.

So then, what is the point of riding all those circles?

Well, in this post, we are going to explain why.

But first, where did dressage come from?

To help us understand the purpose of dressage, we first need to know where it originated from.

In its purest classical form, the original aim of dressage was to train cavalry horses for war.

When used in combat, the horse had to be maneuverable, agile, balanced, and able to ‘fight’ alongside the rider by using extravagant ‘airs above the ground.’

These days, the only place to see the old skills and movements is as part of displays given by the Spanish Riding School. Movements such as the ‘levade’ and the ‘airs above the ground’ do not appear in modern-day dressage tests.

So, what’s the point of modern dressage?

In the 21st century, horses are kept mainly for pleasure and competition, and the FEI (the international governing body for equestrian sport) states that the objective is dressage is as follows:

“The object of Dressage is the harmonious development of the physique and ability of the horse.

As a result, it makes the horse calm, supple, loose, and flexible, but also confident, attentive, keen, thus achieving perfect understanding with his rider.”

To take this one step further, we’ve broken down the purpose of dressage into the following three reasons:

Let’s look at each of them individually.

Reason 1 – To rebalance the horse

The most important step, which is never truly completed, merely refined and refined, is to rebalance the horse under the foreign weight of a rider and equipment.

Due to the horse’s long neck and table-like body, when we first sit in the saddle, he will carry the majority of our weight on his front legs and shoulders, using his head and neck for balance. This is described as the horse being ‘on the forehand.’

Now, bearing in mind that the majority of lameness occurs in the horse’s front legs, it then becomes our responsibility to teach the horse how to carry our weight in a more functional manner that reduces the risk for injury.

In other words, we need to gradually bring him up off the forehand, where adding our weight has put him, and teach the horse how to engage his hindquarters with a lifted and rounded back, to enable him to carry our weight on his stronger hindlegs as opposed to his delicate front legs.

This is of the utmost priority and it is the reason why we ask our horses to work ‘in an outline,’ because only in such a functional posture can the horse carry the rider without physically damaging himself.

This rebalancing is done gradually over time by using the scales of training, upon which both dressage training and judging are based.

The movements that you see in dressage competition arenas, such as shoulder-in, half-pass, and canter pirouettes, are not an end in themselves. Instead, they are used as training tools in the continual development of this rebalancing.

As well as enabling the horse to move in a biomechanical functional posture, other factors that develop out of this rebalancing include the following:

In order to do anything with the horse, it’s imperative that we can communicate with him in a language that he understands.

Correct and systematic dressage training develops a two-way communication system that is clear to both horse and rider.

Not only do we want to be able to rebalance the horse (reason 1), we want to be able to do it without resistance. And in order for this to happen, the horse must find the journey easy and comfortable, therefore, we need to develop him not just physically but also mentally, and this is why a clear two-way communication is needed.

Through correct training, the horse is taught each aid and movement in a logical order; one builds upon the next. This allows us to progress the horse from the basic movements right the way through to the more advanced movements, and to do it smoothly and easily, with the horse remaining happy in his work.

Once you have developed this language together, there is less miss-communication, less second-guessing, and less confusion, helping to form the foundation of a harmonious partnership and a ‘happy athlete.’ The result is that both horse and rider are more confident and get more enjoyment out of the ridden work.

And lastly, a clear two-way communication system will benefit any horse, regardless of the type/breed and regardless the discipline that you choose to do.

Reason 3 – To produce a living work of art

All the fabulous moves that we hope to perform in our dressage tests, from lengthening and going sideways to piaffe and passage, are on display in fields across the world every day. Horses do all of these things at liberty, in play, in alarm, and with stallions in courtship rituals.

Through the rebalancing (reason 1) and the development of a clear communication system (reason 2), we can strengthen our horses until they can do such movements on command with us on board, and yet still appear as if they are doing it without obvious controls.

And what is more beautiful and artful that the glorious display of harmony between horse and rider as they ‘dance’ together in the center of an arena?

This living work of art is only possible if the horse is trained with compassion and an understanding of his needs and abilities because the performance can only truly be beautiful if the horse is relaxed and his education has been without fear.

Although not every horse owner wants to ride a dressage test, all riders should strive to give a harmonious performance, whether that’s performing a canter pirouette during a choreographed routine or jumping fifteen fences against the clock.

Modern dressage competition developed out of the need for cavalry horses to be obedient, strong enough to have a long working life, and agile enough to perform in battle.

Nowadays, the focus of dressage is on the rebalancing of the horse and the development of a clear two-way communication system, resulting in a harmonious partnership and an artful performance.

Not every horse will be a world-class athlete, but if we strive to develop them physically and mentally with the principles outlined above, we have the best hope of having a willing and happy partnership with a horse that will stay healthy and sound over a long ridden career.

Regardless of if you want to go showjumping, eventing, team chasing, happy hacking, etc, dressage training is paramount to your foundation and partnership.

There's more where that came from...

Check out our selection of related articles.

What is a Backward Thinking Horse?

What is a Backward Thinking Horse?

How NOT to Do Dressage

How NOT to Do Dressage

How to Ride From Your Inside Leg to Your Outside Rein

How to Ride From Your Inside Leg to Your Outside Rein

How to Turn Your Horse Without Pulling on the Inside Rein

How to Turn Your Horse Without Pulling on the Inside Rein

How Not to Use a Flash Noseband

This website uses cookies to improve your experience while you navigate through the website. Out of these, the cookies that are categorized as necessary are stored on your browser as they are essential for the working of basic functionalities of the website. We also use third-party cookies that help us analyze and understand how you use this website. These cookies will be stored in your browser only with your consent. You also have the option to opt-out of these cookies. But opting out of some of these cookies may affect your browsing experience.
Necessary Always Enabled
Necessary cookies are absolutely essential for the website to function properly. This category only includes cookies that ensures basic functionalities and security features of the website. These cookies do not store any personal information.
Non-necessary
Any cookies that may not be particularly necessary for the website to function and is used specifically to collect user personal data via analytics, ads, other embedded contents are termed as non-necessary cookies. It is mandatory to procure user consent prior to running these cookies on your website.
SAVE & ACCEPT